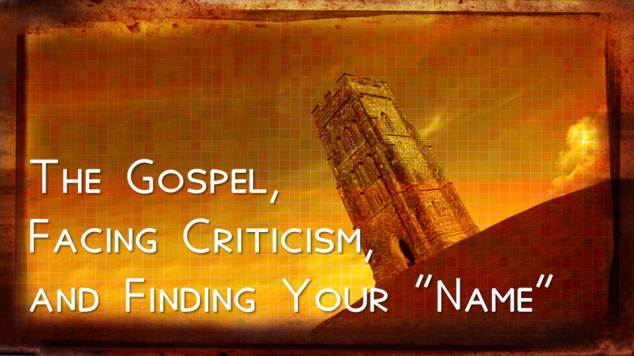 I knew what I was walking into several weeks ago when I decided to write on a topic as controversial as same-sex marriage. Granted, I didn’t realize at the time how much attention it was going to get (I’m still getting back to many of your emails). Nonetheless, I knew the topic was hot and the Bible’s stance was counter-cultural and unpopular.

I’ve now also been contacted by several people who expressed sympathy regarding the anti-biblical stance and denigrating tone of some of the comments the post received. While I appreciate the support, my general reply, in short, is that it doesn’t bother me. There was a day when someone not liking me or not agreeing with my opinion would probably have bothered me to some degree. Depending on the person, it may have crushed me. That day is not today though.

What’s changed? It’s not that I’ve “grown up” or “become tougher,” although life experience and a heightened sense of understanding how the world operates does tend to help. No, I’d like to think that my lack of concern for what others may think is for a much more theological reason than that. The more I’ve grown in understanding the gospel, the more I’ve learned to find my name from it.

What does that mean?

Well, the Bible contains a great deal of information about who/what we are to live for and where we are to find our ultimate value and identity, i.e. our “name.” There’s too much good material to share all of it here, but I’ll give a quick summary: In Genesis 11 we hear the famous story of the Tower of Babel, where we learn that people at that time and place in history were desperately seeking some sort of positive external judgment – “Come, let us build ourselves a city, with a tower that reaches to the heavens, so that we may make a name for ourselves.” (Gen. 11:4) In contemporary language, you could probably say that they were looking for fame…..or a positive performance review…..or just to have people “like” them. The rest of the story, of course, tells of how their plans were thwarted by God because he never intended for humans to establish their identity apart from him, as these people were seeking to do.

If you understand the art of biblical narrative, you’ll be led to contrast this account of Genesis 11 with chapter 12, where we hear God say to Abraham, “I will bless you; I will make your name great“ (Gen. 12:2) Although this is obviously a specific promise to Abraham, there is a general principle established here that God alone is the one with the authority to make names. The echo of this principle is even heard in the Christmas account, when the angel Gabriel announces to Mary, “You will conceive and give birth to a son, and you are to call him Jesus.” (Luke 1:31) See what’s happening here? No human gets to name God. According to the Bible, God names humans.

Similarly, we see the same principle at work in the story of the Rich Man and Poor Lazarus (Luke 16). Ever noticed how the rich man has no name? Mere coincidence? I think not. I believe the Holy Spirit is suggesting that if you live for someone or something other than Jesus (in this case, money), you lose yourself. However, if you live for Jesus, you are known by God eternally, and therefore are truly rich.

Furthermore, if we believe in Jesus Christ as our Lord and Savior, we have ALREADY been named and therefore have no need to make a name. Jesus prayed to his Father, “I have revealed you (Greek: “your name”) to those whom you gave me out of the world…… for they are yours……Holy Father, protect them by the power of your name, the name you gave me, so that they may be one as we are one. While I was with them, I protected them and kept them safe by that name you gave me.”  (John 17:6-12) Get it? The only reason that you’d ever live to “make a name” for yourself is if you don’t realize that 1) God is the only one who gives names, and 2) God has ALREADY given you a name, the status and identity of “his child” through faith in Jesus, the name that is above all other names.

I could go on, but hopefully this is enough to provide the theological framework of the Bible’s teaching on identity, names, and criticism – that humans are desperately looking for a name for themselves, but that we’ll only find ourselves, our true name, if we find it in Jesus.

2 Practical Implications of This Teaching

Much of the world is putting in unhealthy hours at work, enduring unnecessary anxiety, and causing themselves many sleepless nights because they’re trying to create a name for themselves that simply will not last. They want to be “the best” or “the prettiest” or “the smartest” or “the richest” or whatever else, not realizing that such titles are fairly empty and always temporary and, most importantly, don’t benefit you at all after you’re dead. If you are living to create a name that will undoubtedly fall short of the glory of God, then, in death, you will not taste the glory of God. According to the Bible, you weren’t built to create a name, you were designed to receive his name. Consequently, trying to establish an identity apart from God, even if it is an identity that celebrates a good thing – a title like “mother” or “doctor” or “nice guy” or “genius” or “pastor” – it will crush you in the end.

But if you truly recognize the combination of God’s goodness to you and his verdict already laid upon you, you’ll work in a healthier way towards a healthier goal, i.e. expressing gratitude to God. Wouldn’t it make sense that working the way God designed us to would create greater satisfaction and superior quality work?

As a  Christian and one who makes his living as a minister of the gospel, I’m fully aware that some people are going to hate me and hate what I have to say. Jesus promised it would be that way (Matt. 10:22). I’m well aware that on a fairly regularly basis I’m going to offend a segment of society that not only doesn’t care what God has to say, but one which hates that God. Now, if and when I offend people as a Christian, my hope and prayer is that I offend people for the right reasons. If I offend people because I’m unwavering in what the Bible teaches, so be it. I can’t do much about that. However, if I offend people because I’m condescending and self-righteous and unrepentantly hypocritical, then that’s on me. Whatever the reason for the offense, the bottom line is that Jesus also said, “Do not be afraid of those who kill the body but cannot kill the soul. Rather, be afraid of the One who can destroy both soul and body in hell.” (Matt. 10:28)

In other words, I couldn’t care less how this world labels me. You see, I’ve already got my name! I’ve already heard the final verdict. Through Jesus, God has declared me to be his perfect, righteous child who will live in his home eternally. What greater validation could I possibly want? It’s like the difference between a 4-year-old calling you a good basketball player and Michael Jordan calling you a good basketball player. If a 4-year-old marvels at your skills, it really doesn’t mean much since his praise is a bit shallow due to his lowliness. On the other hand, if the greatest basketball player of all time says you’re “good,” THAT’S validation.  That’s proof! So if God himself says you’re valuable, why on earth would you care what another flawed and broken human being thinks of you? Why should you let that affect your self-image? It’s not just unhealthy; it’s illogical.

Additionally, if your self-image is so cemented in Jesus that it is not altered by the criticism of others, you can actually take the comments of your critics and use them to your advantage. Sometimes, although perhaps presented without love or tact, criticism is fully warranted. But whether the criticism is fair or not, if that criticism doesn’t shake your self-perception in Jesus, then it won’t crush you, it’ll just help you continue to grow. So thank the Lord for your critics too.

Only when you discover that you already have the most beautiful name possible, affirmation and acceptance from God himself through Jesus, will you stop letting the world name you and stop worrying about the names it may call you. And when you do…..well, won’t that be nice? Wouldn’t it be great if you never feared criticism again? Do you realize that the gospel of Jesus offers you that exact freedom?

“The biggest danger of receiving criticism is not to your reputation, but to your heart. You feel the injustice of it and feel sorry for yourself, and it tempts you to despise not only the critic, but the entire group of people from which they come.” – Tim Keller, from his Redeemer City to City Blog

One thought on “The Gospel, Facing Criticism, and Finding Your “Name””