St. Augustine opened his famous Confessions with a prayer that began:

“You have made us for yourself, and our hearts are restless until they rest in you.”

St. Augustine understood something that many of the brightest modern sociologists and anthropologists are just now starting to grasp – all of us human beings worship. This is what we’re primarily wired to do. Now, in a secular world that strongly discourages any religious influence over the public sphere, words like “worship” are generally dismissed. But Augustine was right. We humans are not primarily products of what we think – the “brain on a stick” paradigm that has been perpetuated over the past century. Read through David Brooks’s The Social Animal and you’ll likely be convinced. In fact, some research has suggested our lives are probably the products of only 3-5% of what we actually think. More than that, our lives are products of what we truly love. In other words, if you’d really like get to the bottom of what someone is about, who they really are, the wrong question is to ask them what they think/believe. The better question is to ask them what they want/desire from life. The ancient world likely understood better than the modern western world that the core of our being, the gravitational pull of who we are, lies not so much in what we think, but in what we want.

To confirm these thoughts, I just want to share with you some examples of the how the secular world around us “worships” – though you may have never thought of it like that before.

Again, if there is any doubt about the secular world picking up on this “everybody worships” thing too, I’d direct you to David Foster Wallace’s commencement address at Kenyon College in 2005. Wallace is largely consider one of the best American writers of the past century and arguably the most insightful postmodern writer of our time. In the address he talks about how religious or irreligious, we’re ALL worshipping, and how destructive it can be to worship the wrong thing:

“You get to decide what to worship. Because here’s something else that’s weird but true. In the day-to-day trenches of adult life, there is actually no such thing as atheism. There is no such thing as not worshipping. Everybody worships. The only choice we get is what to worship. And the compelling reason for choosing some form of God to worship (he lists several possibilities from Jesus to Allah to Yahweh, etc.) is that virtually every other thing you choose to worship will eat you alive. If you worship money and things…then you will never have enough. Worship your body and beauty and sexual allure and you will always feel ugly. When time and age start showing, you will die a million deaths…Worship power and you will end up feeling week and afraid, and you will need ever more power to numb your own fear. Worship your intellect, you will end up feeling stupid, always on the verge of being found out….And the insidious thing about these (false) forms of worship is that they are unconscious. And the so-called ‘real world’ will not discourage us from operating on these default settings, because the so called “real world” of man, and money, and power, comes merrily along on fuel of fear and anger and frustration and craving and the worship of self. Our own present culture has harnessed these forces in ways that have yielded extraordinary wealth, and comfort, and personal freedom, the freedom to all be lords of our own skull-sized kingdoms, alone at the center of all creation.”

Uhhh….for starters, it’s any wonder this guy is easily one of the best writers of our generation – this has quickly been regarded as one of the most powerful commencement addresses in history. Second, he’s not a Christian – he’s merely objective enough and insightful enough to understand what makes humanity tick – the innate need to worship something greater than self, and this colliding with our destructive desire to rule the universe.

And if David Foster Wallace is right, and St. Augustine is right, and David Brooks is right, then it would also stand to reason that we’d see additional concrete evidence of this “everyone worships, mostly incorrectly” sentiment playing out in the world around us. I believe we see exactly that. 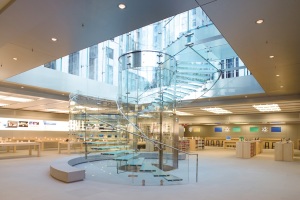 Awhile back a ministry friend sent me an interesting article titled: “We Asked a Cultural Historian: Are Apple Stores The New Temples?”  The article insightfully points out the similarities between Apple Stores and ancient worship. For instance, ancient Jewish worship had pilgrimages to the Temple in Jerusalem to 1) make sacrifices and become right with God, and 2) to praise the goodness of this God. Today, we have Apple Release Day, what the article calls “The Feast of St. Jobs”, where hoards of people line up to make a sacrifice of great money to receive the blessing of the next generation iPhone. Apple is not merely a product, either. It’s a brand that represents community, fueled by the loyalty of customers who believe they are part of a movement that is improving the world. Let us not forget that cathedrals, in their day, were actually representative of high-end technology, similar to the Great Pyramids of Giza. Cutting edge technology has seemingly always gone hand-in-hand with large scale public worship.

The author of the article offers additional similarities:

“We walk inside. It’s light and bright, and immediately in front of us, a wide staircase of opaque glass sweeps up to the second floor. This is an old, old trick. “It’s used in ziggurats, even.” It creates a space that emphasizes your smallness when you walk in. You look at something far away, and that makes your body feel like you’re entering somewhere sacred or holy. To enter that sacred space, first we have to walk up a few stone steps. They’re wide and deep, enough that you have to slow down just a bit to walk up them. Steep and narrow steps create the same effect in that they make your body feel as if something important is happening. Above, a massive skylight, stretching the length of the room, lets in the light. To the right and left are the tables with phones and watches arranged around the periphery—a clue that this is not supposed to be an individual experience. Even when you are holding the phone in your hand, you are gathered around a table with others. There are no aisles here to sequester yourself in: thanks to the open floor plan, you experience the phone together with everyone in the store.”

The article continues with many other interesting points of comparison, but the last lines are my favorite:

“Apple seems to understand that the people who visit their store are looking for answers to questions deeper than how they should make calls or connect to the internet. On the walls of the stores, framed by the border of a screen, are pictures of planets and star systems—with these flat, luminescent, monolithic devices, they seem to promise, you can understand the entire universe.” 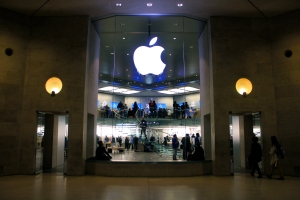 Apple gets it. Do you? They’re not just selling phones and watches. They’re selling community, transcendence, power, and a way to make sense of the world. That’s WORSHIP.

I’m not saying Appel is evil. I’m an Apple guy. I’m writing this on a Macbook, with my iPhone plugged in and charging, and just received a message from my wife on her iPad. The problem is never the subdued creation, but the creatures that place confidence in and offer praise to created things ahead of the Creator God.

Do a quick inventory of the most influential places in society and see if they don’t mimic Apple stores in some ways. It’s the holiday season, so you’re likely going to be doing an excessive amount of shopping. Most people are shifting to purchasing items online. Malls are dying. But the Christmas season might be the one time you still dare to step foot in one. Have you ever thought about the setup of a mall? Noticed that there aren’t any windows? Noticed that there aren’t any clocks? Noticed how they have a labyrinthine layout? Noticed how they have inanimate, faceless characters (i.e. mannequins) who are trying to preach to you about what the good life really should look like? Notice how every store has a display just outside the entrance doing outreach? Going to the mall is certainly not inherently evil, but you’ve got to understand that this obviously could be a way which Satan, the world, and our sinful flesh, persuade us to worship materialism.

So, what does this mean for the modern Christian?

Anyone who has followed my blog for a while has probably recognized how irritated I get when the accusation is brought against Christianity that we are merely a bunch of mindless followers. What irritates me even further is when that accusation is warranted.

All you have to do is read through the New Testament and see how many times Jesus himself and the other authors say, “Consider” (i.e think about this). This is not at all a contradiction to what I said from the outset, that we are not primarily products of what we think/believe, but products of what we love. The thinking aspect is important because it helps us realize when our loves have gone astray. As we analyze the way we manage our time, energy, thoughts, money, attitudes, we come to realizations about what we truly love and worship, regardless of what we say or do on Sunday mornings.

The first step in overcoming the secular temple worship, then, is to become aware that we struggle with it. The second step in processing sin is to repent of what we are and what we’ve done. All of life is repentance, as Luther said – a turning away from what we think things to be and surrendering to the righter, more beautiful authority of what Christ tells us. Next, we recognize that Jesus not only paid for our mistakes on the cross that should have been ours due to our false worship, but he also lived the life we needed to and gave it to us. You simply couldn’t pull the man away from the real Temple – when his parents moved with the social caravan, Jesus dropped his anchor in God’s House, teaching and preaching, praying and praising. Worshipping. “Why were you searching for me?” he asked. “Didn’t you know I had to be in my Father’s house?” But they did not understand what he was saying to them. (Luke 2:49-50)

The secular temptations offer salvation, like that shiny new Easy Bake Oven on the Christmas list offers the promise of eternal happiness to the eager child who cannot live without it. And then Dec. 29th rolls around. Four flavorless cupcakes later and you realize this Hasbro mainstay won’t solve all of the problems of your childhood. Neither will the non-Jesus, secular salvations offered to adults. There is only one real Temple to worship at – one where if you get the God who dwells there, he’ll satisfy you, and if you fail him, he’ll forgive you. This is the Temple that was torn down and after three days was resurrected (Mark 14:58; see also Matt. 12:6).