“Without God and the future life? How will man be after that? It means everything is permitted now.”

Communist Russia, Communist China, and Nazi Germany eliminated an incredible amount of human life. Stalin was responsible for around 20 million deaths. Mao Zedong’s regime is credited with a staggering 70 million deaths. Hitler comes in third with around 10 million murders attributed to his name. The twentieth century was the world’s great experiment in seeing what intentionally godless governments would produce. The end result was a century with more slaughter of human life than all other centuries combined.

Without question, the saving grace of the western world has been the presence of an inherited Christian worldview. Abraham Lincoln, William Wilberforce, and Dr. Martin Luther King Jr. were able to make assertions about human rights and usher in civil rights reform based solely on a belief in the biblical Imago Dei (i.e. “the image of God”) – the idea that all humans have value because God himself imbued humanity with special value.

As the faith of a nation goes, so goes its perception of personhood.

Consequently, if you’ve been following trends of Christian religious activity over the past 20 years, it was no surprise to you that the New York State legislature passed the Reproductive Health Act on January 22, the 46th anniversary of Roe v. Wade. The act allows abortion at any point during a pregnancy (24 weeks had been the prior limit) if it is deemed “necessary to protect a woman’s life or health.”

When you’re raised in the United States, it’s perhaps easy to forget that abortion and infanticide have been quite common in world history. The reason they have been forbidden in the West for centuries is only because Western values were shaped by Christianity. Author Benjamin Wiker makes the case in Moral Darwinism:

A fairly apples-to-apples comparison of what we see happening today in America is what was seen in the Roman Empire. The Twelve Tables – the earliest known Roman legal code, written about 450 B.C.E. – permitted a father to expose any female infant and any deformed or weak male infant to the natural elements to let them die in the fields. Philosophers Plato and Aristotle, both recommended infanticide as legitimate state policy. (cf. Plato, Republic 5; Aristotle, Politics 2,7) Seneca regarded the drowning of children at birth as both reasonable and commonplace. Tacitus stated that the Jewish mindset: “it is a deadly sin to kill an unwanted child,” was but another of the Jews’ “sinister and revolting” teachings (cf. The Histories 5.5). The famous Roman medical writer, Celsus, goes into great detail in De medicina (cf. 7.29) about how to surgically carry out an abortion. Etc.

Some of these thoughts are new to America. But they’re not technically new.

So, the relevant question then is: How did the early Christians, with very little political, educational, or financial clout, react to the tragedy taking place around them?

To read the rest of the article, CLICK HERE to continue to the Bread for Beggars site. 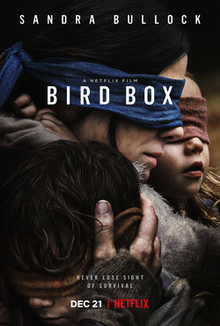 For the first time ever, the cinematic buzz over the holiday season was not about a blockbuster that came out in theaters, but about Netflix original Bird Box. America’s top streaming service boasted that the film garnered 45 million viewers within a week of its December 21, 2018 release date.

If for no other reason, Bird Box is significant for that – another obvious sign that this generation has changed the way it primarily consumes content, entertainment or otherwise.

But make no mistake. There is some intrigue surrounding the significance of the material itself. Anything that captures the attention of 50 million people must necessarily be tapping into something that feels common and important to the human experience.

The story is that of Malorie (played by Sandra Bullock), a mother, who is trying to bring two children to safety in a post-apocalyptic world. The movie flashes back and forth between the days at the outset of the cataclysmic event – the arrival of a mysterious force that is driving most of humanity around the world to suicide – and the “present day” – which consists of Malorie paddling the two children she’s responsible for down a river to attempt to reach safety. The catch, the reason for the blindfold, and subsequently the frontrunner for best meme fodder of 2019, is that the force cannot actually affect you so long as you don’t look at it.

The movie did not receive tremendous reviews, netting only a 51 Metascore. So why the popularity?

Crazy special effects? The $19.8 million budget is minimal by comparison to most large theater releases.

The flawless plot? Can’t be. A quick glance at IMDb’s user review page will help you see that the lack of explanation for the origin of the evil entities, the inconsistent powers/limitations of those entities, the lack of explanation for why some humans remain entirely unaffected by the entities are all problematic. Furthermore, the lack of character dialogue about the cause or intention of the entities is a recurring theme amongst critic reviews. While I can’t speak for the book, most reviewers would consider it a fairly significantly flawed plot. So that can’t explain viewer attraction.

Is the movie’s appeal the fact that Sandra Bullock is incapable of turning in a bad performance? Nope.Although, I’ll admit, this is my favorite movie of hers in a while.

I believe that storytelling, at its best, taps into something powerful that we know deep down, but we previously lacked the intellectual framework, or the vocabulary, to give explanation to. With that, I’ll offer 3 “biblical” reasons why I think Bird Box has been a hit: